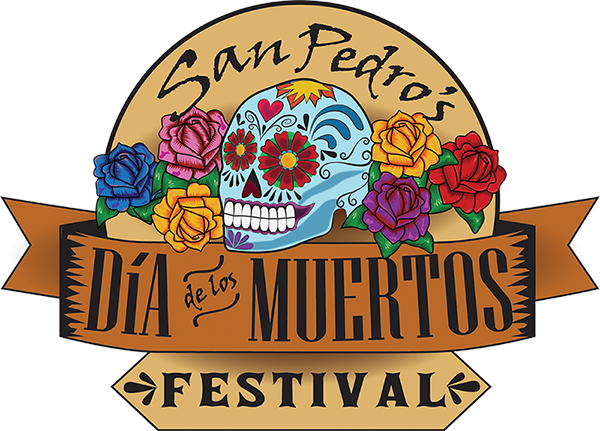 As part of San Pedro’s Dia de Los Muertos festival, the San Pedro Historic Waterfront Business Improvement District will be presenting an open-air exhibition of community altars that honor the deceased and/or explore the tradition of Dia de Los Muertos and other such rituals memorializing the dearly departed.  Festival hours: 3pm to 9pm.

For those unfamiliar with this Holiday’s traditions, altars honor the deceased with food and oftentimes colorful and playful offerings. Tributes include everything from toys for children, photographs, special foods or other symbolic items that were meaningful prior to death.

Marigolds, also known as the flower of the dead (cempasúchil), are often used as well as colorful paper flowers, birds or skeletons. The images of the skeletons (calacas) are not meant to be scary, but instead mimic joyful moments, such as dancing.

Artists and community members were asked to submit altar concepts for consideration for the exhibition that will take place during the Festival on October 28th, 2018. There was no charge to participate in the Sacred Altar Exhibition and Competition. Creating an altar to honor the dead is one of the most important parts of Dia de los Muertos. Altars can be heartfelt and humorous, simple or extravagant. In addition to deceased family members and friends altars are constructed for departed pets, celebrities, and historical figures. The Sacred Altar Exhibition and Competition will showcase a variety of perspectives within the Dia de los Muertos tradition. Cash prize of $1000 to first place winning entries. Altar of Remembrance – There will also be a community altar where anyone who has lost a loved one is invited to leave a picture, personal note or other small item of remembrance

Dia de los Muertos, or Day of the Dead, dates back to Pre-Hispanic and Spanish customs. The modern holiday is a synthesis of Aztec and Spanish traditions. It is not a sad occasion or a time for mourning, rather it is when family and friends gather to remember and celebrate departed loved ones. In Mexico, Dia de los Muertos is a national holiday, though it is celebrated in other parts of Latin America and the Philippines as well.

Get the latest information  here.