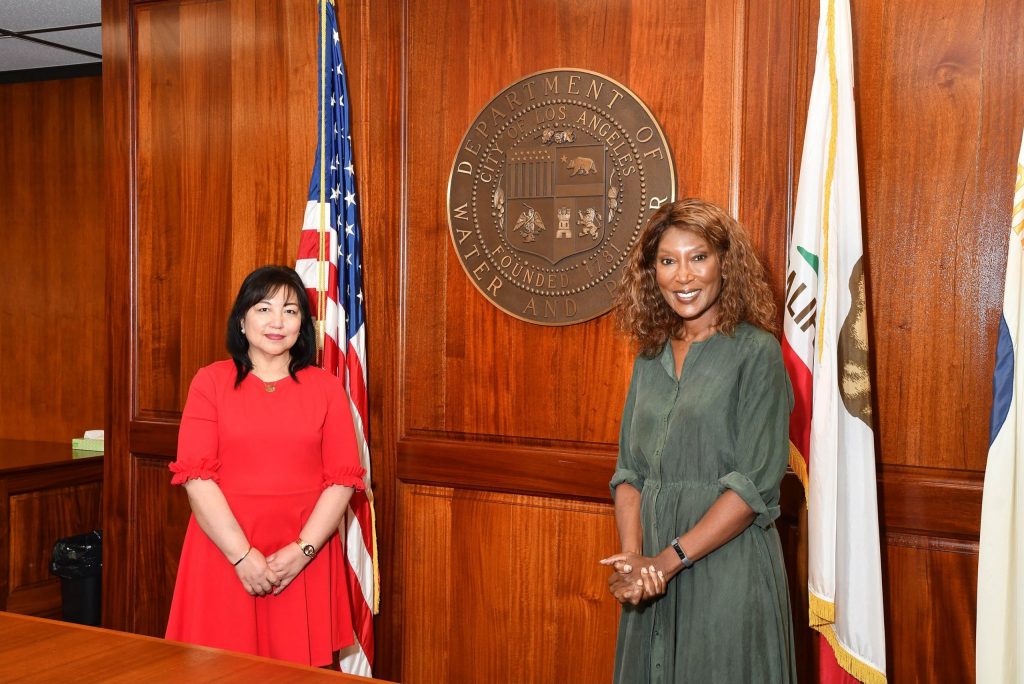 (July 28, 2020)–Attorney and public policy strategist Cynthia McClain-Hill was elected today as President of the Board of Water and Power Commissioners, and Commissioner Susana Reyes, a retired LADWP customer service director for low-income programs and sustainability advisor to Mayor Eric Garcetti, was elected the Board’s Vice President. McClain-Hill replaces former U.S. Congressman Mel Levine, who has served as Board President since 2013—the longest-running term of any Board of Water and Power Commission President. Mr. Levine nominated both for their respective positions, which were approved today by the Board.

An advocate for racial and environmental justice with an outstanding record of service in the public and non-profit sectors, McClain-Hill has served as Vice President of the LADWP Board since September 5, 2018. She was appointed to the Board by Mayor Eric Garcetti and confirmed by the City Council on August 15, 2018.

“From the Police Commission to the DWP, Cynthia McClain-Hill has been unafraid to tackle our toughest challenges, giving her time, energy, resolve, and experience to the cause of a fairer, safer, more equitable Los Angeles,” said Mayor Garcetti. “As we endure and emerge from the COVID-19 crisis, I have no doubt that Cynthia will continue the bold and thoughtful leadership of Mel Levine as LADWP Board President, and help us push forward on the path to healthier communities and a more sustainable city.”

“I am greatly honored to serve as President of this Board and grateful for the support of Mayor Garcetti, members of the City Council, and my fellow Board members. This is a time of unprecedented challenges, as we work to build a stronger Los Angeles by achieving our goals for clean, reliable and sustainable water and energy in the midst of an international pandemic, financial crisis, and urgent cries for racial justice and equity in our city,” McClain-Hill said. “I am confident that working together, LADWP can surmount these challenges and come out a stronger, more inclusive organization that provides equity and fairness for our customers, communities, and employees in everything we do.”

As Managing Director of Strategic Counsel PLC, McClain-Hill leads the firm’s regulatory, land use and environmental law practices. She is a widely respected attorney and public policy strategist with an outstanding record of service. Prior to her appointment to the Board, she served on the City’s Police Commission and Community Redevelopment Agency. She is a past member of the California Coastal Commission, the California Fair Political Practices Commission (FPPC), the CalEPA Environmental Justice Advisory Working Group, and the Los Angeles City Small and Local Business Advisory Committee. She served as president of the National Association of Women Business Owners in 2008-2009. Consistently named one of Southern California’s “Super Lawyers” based on surveys of 65,000 Los Angeles area attorneys, McClain-Hill ranks among the top five percent of the state’s practicing attorneys.

Outgoing President Levine said, “It has been a great honor for me to serve as President of the Board of Commissioners for the past seven years and I am very pleased to have nominated Cynthia McClain-Hill as the new Commission President and Susana Reyes as the new Vice President.  They will bring great energy and experience to their respective positions and they will also offer the perspective of members of communities which have been historically inadequately represented at a time when that perspective is urgently needed.  Here too, LADWP will help lead the way.”

LADWP General Manager and Chief Engineer Martin L. Adams said, “All of us at LADWP owe President Levine a tremendous debt of gratitude for his leadership and service over the past seven years.  He has led the Board during some of the Department’s most transformative and challenging times and has done so with wisdom, thoughtfulness, persistence and humor. This Department is stronger, because of Mel Levine’s steady leadership. Our newly elected Commission President Cynthia McClain-Hill is a strong, impactful leader with a toughness that enables her to get things done. I look forward to continuing to work with her, Vice-President Susana Reyes and the entire Board to accomplish great things for the Department and the City as we focus on transforming our water and power supplies to more sustainable resources, investing in infrastructure, and creating equity within our organization and the communities we serve.”

Newly elected Vice President Susana Reyes was appointed to the Board of Water and Power Commissioners by Mayor Garcetti and confirmed by the City Council on June 5, 2019. Reyes is the first Filipino-American and also the first LADWP retiree to sit on the Board. She previously served as the director of LADWP’s Low-Income Customer Access, a position that helped ensure low-income ratepayers could access financial assistance, discounts and rebates offered by the utility.  A public servant for over 33 years, she is the founder and CEO of AgilEngines LLC, an advocacy and consulting firm focused on community outreach and civic engagement strategies.

“I am humbled and honored by the trust instilled in me and I am excited to get to work as the new Vice President. The City of L.A. and LADWP are at a crossroads going through a movement moment. I envision opportunities for innovative and bold solutions for LADWP to serve the public more reliably, safely, and equitably and in new ways that will transform its culture and capacity for change. I will work to ensure the public trust through a system of transparency, public participation, and stakeholder collaboration.”

Reyes’ experience also includes working on Mayor Garcetti’s Sustainability team as a Senior Policy Analyst, where she helped oversee the implementation of Los Angeles’ first Sustainable City pLAn and secured a $1.7 million grant for the City from the California Air and Resources Board to help launch BlueLA — an EV car sharing pilot program in low-income communities. She is also an active member of the Sierra Club, and was elected to the organization’s first-ever all-female Executive Committee in 2017.  She serves on the Governing Board of the Sierra Nevada Conservancy on forest health and watershed issues and has served on the board of the L.A. League of Conservation Voters. Her work advancing equity and climate justice initiatives has earned her distinguished awards and recognitions.

To read the biographies of the Board of Water and Power Commissioners, click here.