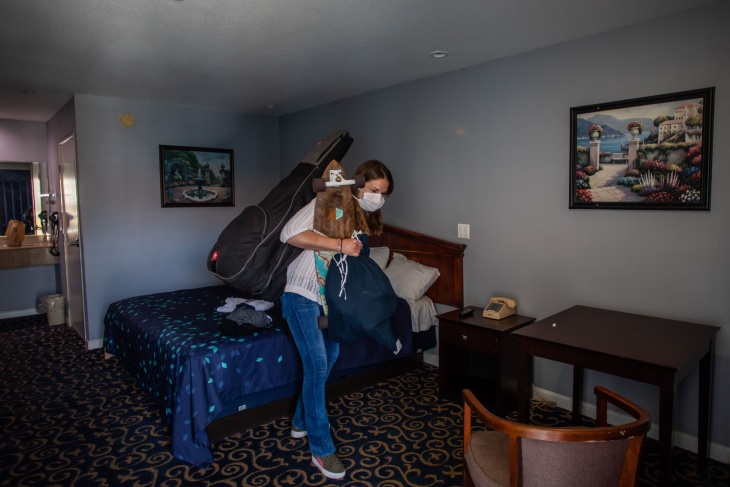 Julie Mariane gathers her belongings in a motel room provided to homeless people by the NGO St. Joseph Center, as she gets ready to be transferred to a hotel room in Venice Beach, California on April 26, 2020. – Julie has been living in the street for one and a half years. The NGO St. Joseph Center is providing Hotel rooms to the homeless people at risk or infected with Covid-19, through Project Roomkey of the City of Los Angeles.  (Photo by APU GOMES/AFP via Getty Images)

In April, when Governor Newsom announced Project Roomkey — aimed at moving 15,000 homeless Californians into rented hotel rooms — it was lauded as a “win-win.”

Homeless people would get to come indoors, and hotels would get to recoup lost income from the collapse of the tourism industry.

Unprecedented in scale, it was seen as ambitious, even audacious, though some doubted if the state had the ability to accomplish such a vast undertaking in such a short timeframe.

Two months later, according to the Governor’s office, 9,400 rooms are now occupied, a third less than the 15,000 goal. READ FULL ARTICLE